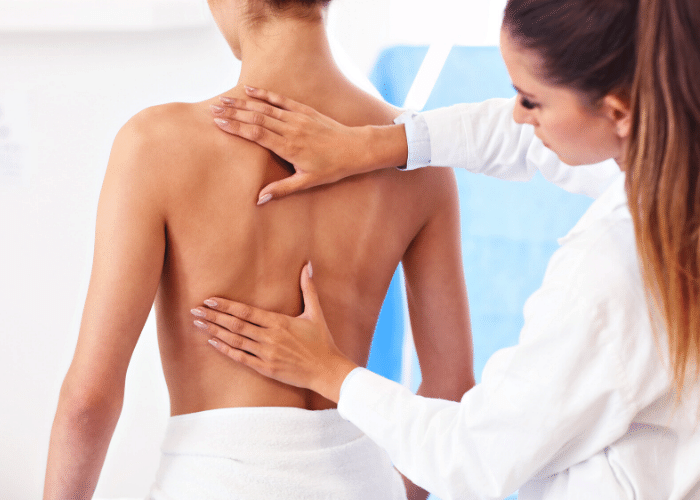 It is estimated that over 80 percent of Americans suffer from low back pain. Although most of them cannot have a clear diagnosis of pain sources, it is very common that pain is caused  by  a herniated, torn,  or ruptured disc, also known as a slipped disc or pinched nerve. The condition results when part of one of the discs in the spine bulges out and irritates the nerves nearby. Patients report pain from a herniated disc in back or radiating down one or both of the legs.

This latter condition is known as sciatica or radiculopathy. The majority of disc herniations occur in the lumbar region of the spine, which includes five discs in the area between the rib cage and the pelvis.

“Today, according to Kaixuan Liu, MD, PhD and founder of Atlantic Spine Center, in cases of contained herniation, we can perform a minimally invasive procedure called an endoscopic discectomy.”

This condition is commonly misunderstood and many patients don’t fully understand what is causing their pain. The discs of the spine contain a spongy material called the nucleus which is encased in a set of fibrous rings called the annulus. Daily activity can create pressure on the discs that cause the nucleus to press against the annulus. “The discs act like shock absorbers,” Dr. Liu explains. “They help to cushion the bones of the spine from the impacts of regular movement as well as more strenuous activity such as running and jumping.”

Dr Liu adds, “as we age, the annulus weakens and degenerates and the nucleus can begin to press against the annulus and cause it to bulge, or herniate, outward. In some cases the nucleus can squeeze completely through the outer ring of the disc.”  Lumbar disc herniations are typically caused by general wear and tear and an abrupt, traumatic injury such as the kind people experience when they lift something heavy while bending at the waist.

The symptoms of herniated discs can vary tremendously, Dr. Liu says. “In some cases a patient might feel only mild pain in cases where only the disc itself is affected. But in cases where the disc material is pressing on nerve roots, patients can experience severe and unremitting pain in their back, buttocks and legs. In some cases patients report sensory changes such tingling, numbness and muscular weakness in their toes.”

An endoscopic discectomy is one of the minimally invasive spine surgical techniques for treating a slipped disc and is best for small disc tears, disc degerations, and all kinds of disc herniations. Dr Liu explains that this procedure is arthroscopic and the least invasive but has been proven having the same or better results than traditional spine surgery. The skin incision feels like a nail pinch and the recovery is fast. Candidates for this procedure have chronic low back pain that has lasted for more than eight weeks and has not responded to conservative treatments. A diagnostic MRI, CT scan or other test is used to confirm disc herniation, and a nerve diagnostic test (such as an EMG) is used to show nerve root irritation.

The endoscopic discectomy uses a tiny camera, called an endoscope, which is passed through a small tube that has been inserted into the spine via a tiny incision less than in an inch long. The patient is lightly sedated and the area to be operated on is treated with a local anesthetic. The entire procedure typically takes less than 1 hour. The benefit of endoscopic discectomy is less pain, less risk of infection or other complications, and a much shorter recovery time for the patient. In most cases, patients leave the surgery center or hospital the same day and are back to their typical activities in approximately a few days.

Dr. Liu adds that in many cases, a herniated disc will resolve itself with conservative treatments including anti-inflammatories, physical therapy and exercise and sometimes with stronger pain medicine, when necessary. These are logical first steps before considering surgery. However, in cases where conservative treatments don’t provide relief and surgery is recommended, patients now have the more attractive option of the endoscopic discectomy over the old-fashioned open back operations which involved general anesthesia, a stay at the hospital, and lengthy, painful recovery and rehabilitation.