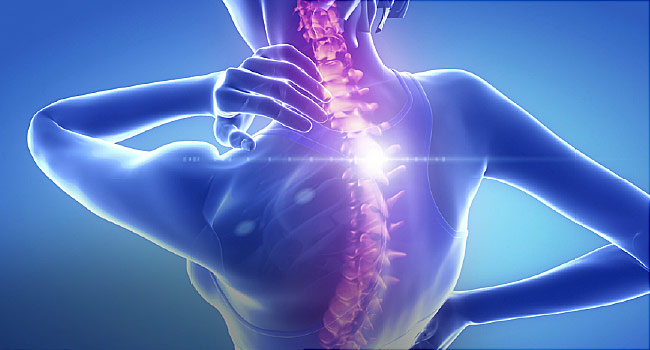 Life can be painful enough without that ache in the back or crick in the neck, but the soreness might be more than a matter of a few overworked muscles, according to Kaixuan Liu, MD, PhD, medical director of Atlantic Spine Center and a world-renowned endoscopicspine surgeon. The diagnosis, he says, could well be a herniated disc somewhere along the spine, especially if pain is ongoing, even debilitating at times with movement; radiates to legs, buttocks, arms or shoulders; and is accompanied by some numbness or weakness.

As many as 80 percent of all adults in the United States and other Western nations will experience one or more episodes of neck or back pain at some point in their lives. Because the spine involves a complex system of nerves, muscles, cartilage, ligaments and bone that run its length, not all neck and back pain is automatically due to a ruptured disc.

“However, disc herniation is commonly an underlying cause for the pain,” Dr. Liu explains.

Often called the spine’s “shock absorbers,” discs are gel-filled capsules located between the spine’s bony vertebrae. They prevent vertebrae from rubbing together and help maintain spine flexibility. Back injuries; undue spinal stress from heavy lifting or participation in sports; even the normal aging process, during which discs dry out and become more brittle, can force a disc’s outer membrane to crack and its inner core material to ooze out, oftentimes pressing against surrounding nerves.

Herniation also occurs if the tissue connection between disc and spinal bone is avulsed (torn). Sciatica, for example, which causes pain in the lower back and buttocks regions and leads to numbness in the leg, is a complication that develops when a lumbar disc herniates and inflames the sciatic nerve, Dr. Liu says.

The good news: treatment options for herniated discs are many, and surgery is not necessarily the first and best approach to management of the problem, Dr. Liu says.

Statistics indicate that fewer than 2 percent of patients with herniated discs require surgery. Authors of a 2017 analysis published in Pain Physician determined that ruptured discs tend to heal themselves – “de-herniate” – within weeks in more than 60 percent of cases, with or without conservative medical therapy, including pain-relieving medications, muscle relaxants, and exercises to strengthen back and stomach muscles and improve range of motion.

“Many experts in the medical community believe that, over time, the material protruding from a herniated disc can shrink, either because a portion of it is reabsorbed by the body through natural processes or, perhaps, as the result of spinal extension exercises,” Dr. Liu says. “As the ruptured disc gets smaller, it is less likely to irritate the nerve roots around it.”

For patients whose herniated discs fail to respond to more conservative approaches, including rest, light exercise, medications, hot or cold compresses and physical therapy, surgery may be required. Advancements in surgical techniques, however, mean correction of disc abnormalities can oftentimes be performed minimally invasively with quicker, less painful recovery and on an outpatient basis, Dr. Liu says.
Meanwhile, physicians and scientists continue the search for improved options to treat herniated discs and other back and neck pain issues. At the November 2017 annual meeting of the Radiological Society of North America, researchers, for example, reported that more than 80 percent of 80 study participants whose herniated discs had not responded to conservative therapy remained pain-free a year after receiving one, 10-minute treatment with image-guided pulsed radiofrequency energy.

Of course, the best medicine is prevention, Dr. Liu emphasizes. Some risk factors cannot be avoided, like gender – men are twice as likely as women to sustain herniated discs, family genetics and age, but Dr. Liu offers these tips to maintain good spinal health:

A Brief Overview of the Latest Dental Industry Facts and Statistics