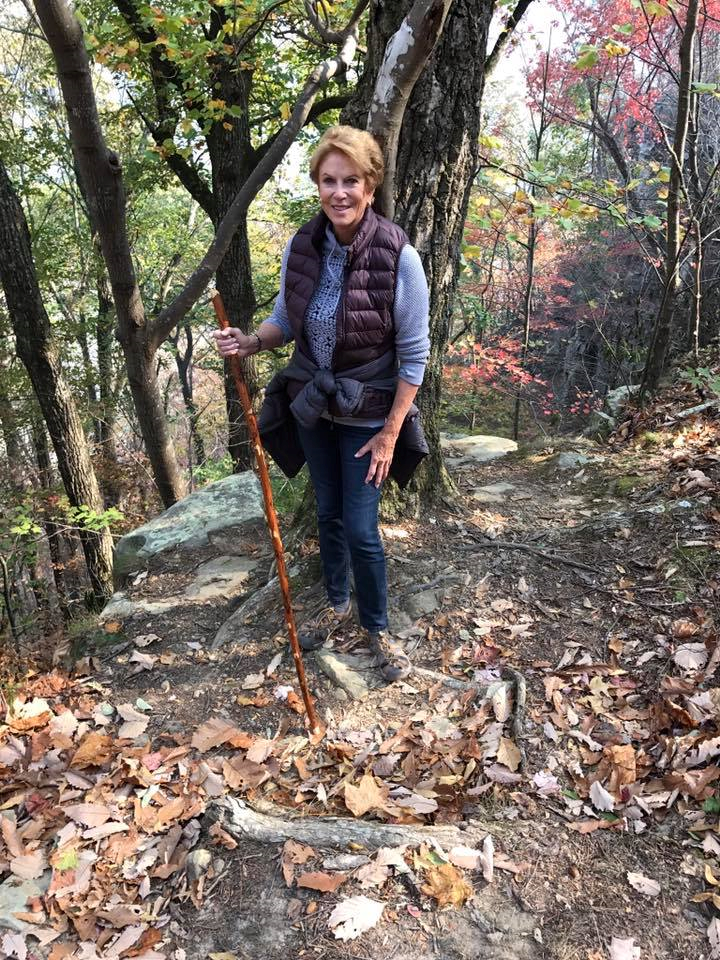 Like many who moved to the Lake District after retirement, I hoped to continue and even expand the activities I had previously enjoyed in Atlanta.  For me, these were gardening, writing, tennis, and bridge.

And, for the first three years, all went as planned: tennis three times a week, gardening daily, bridge, bridge, bridge, and journaling (I still do it the old-fashioned way btw….pen and ink… just like my former next-door neighbor, the acclaimed author, Pat Conroy, who, during a short outdoor break from writing his tome THE PRINCE OF TIDES, had assured me over the backyard fence that his first drafts were always done in longhand!  Wow… I had felt an immediate rush of artistic kinship since my bi-monthly home and garden column and articles for SOUTHERN ACCENTS Magazine were being scratched out with a trusty ballpoint too!

My only real medical concern back then was to not go down the path of strokes, palpitations and blocked arteries that had afflicted my parents, their siblings and their parents.  I admit that I made quite a study and implementation of supplements and anti-inflammatory foods starting in my 40’s, but on the other hand, I hadn’t thought twice about swallowing baby aspirin daily or NSAIDs such as Ibuprofen and Naproxen at the first twinge of back pain from an overeager thrust at the tennis ball or a stubborn root ball in the garden.

So, it came as a total surprise when about three years into my joyful retirement years, I developed a niggling pain in my right thumb… come on, neither of my parents had suffered from right-thumb disease!… but again neither had indulged in the repetitive motions that my right thumb had overseen over the last 70 years…. writing out manuscripts, typing manuscripts (how many times had that right thumb hit the spacebar alone over my various careers?).  And, then, to add insult to injury, along came a nagging BIG pain in my right jaw that soon escalated to the point where opening my mouth wide for that double decker club or forming the tongue-twister words, “temporomandibular joint disorder” (TMJ) could bring tears to my eyes… Ouch… double ouch!

So here I was in my early 70’s afflicted with mouth and hand disease?  My thumb joints became so hurtful that I couldn’t hold a pencil, and the only thing that gave relief were NSAIDS (and, of course, wine).  Trouble was, my new research into NSAIDS was also a cautionary tale…. baaad for the kidneys and REALLY baaaad for the liver.  In fact, I was flummoxed and appalled by what I read about the chronic use of NSAIDS… but I was in pain, and I had to accept that osteoarthritis and TMJ had entered my life for good.

Once again, I researched and asked questions, and was led to a website called ConsumerLabs.com.  As the name implies, CL is an independent, paid subscription only ($40/yr), website that gives in-depth analysis of non-FDA regulated supplements, their benefits (if any), side effects (if any), clinical trials (if any), cost per serving, and, most importantly, whether or not the supplement in question actually contains the ingredients in the amounts touted by its manufacturer on the label. Despite finding nothing in my CL research that had really proved effective for my particular ailments,  I then doggedly tried with NO beneficial results:  acupuncture, raisins soaked in vodka, glucosamine, turmeric, prescription salves, over-the-counter creams, castor oil (which really does cure most things)… well, you get the picture.  Only one thing was certain… I couldn’t take NSAIDS since liver disease also ran in the family.  You can bet I wasn’t about to help that lethal gene trait by taking NSAIDs on a daily basis.

At this juncture, it seemed rather hopeless. I’d retire from the courts, buy a card-shuffling machine, invest in box-cutter stock, and suck on vodka-soaked raisins.  AND THEN, I discovered CBD, and the whole point of this essay was about to unfold.  Heavens to cannabinoids…about time, you say!

Humm… easy for you to say, but not so easy for a layperson like me to explain. “CBD” is indeed shorthand for “cannabidiol,” a pain-relieving compound derived mainly from hemp, a plant that falls under the umbrella of the Cannabis genus; but after that, it’s easy to literally get lost in the weeds!  Just know that the hemp plant now used for production of high levels of non-psychoactive CBD differs greatly from its cannabis family “sibling” that’s been selectively bred over the centuries to produce predominately high levels of psychoactive THC.  As a result, although they are the same C. sativa cannabis species, the comparative differences between the resulting two plants in appearance, cultivation, function and application are indisputable!

Consequently, in late December 2018, the taller, hardier industrial hemp plant — the source of highest levels of CBD and almost negligible levels of psychoactive THC– can once again be grown legally in every state of the union.  In fact, before they were unjustly lumped together with cannabis plants grown for THC marijuana production in the 1920’s, industrial hemp was once the most widely grown crop in the world.  George Washington, Thomas Jefferson, and most of the signers of the Declaration of Independence grew hemp on their home farms to make rope, clothing, accessories, feed for livestock and now, FINALLY, ONCE AGAIN, extracts that help to alleviate pain….does manna from heaven come to mind?  You can bet the pharmaceutical companies were not anxious for word to get out about this “rediscovered” perhaps healthier alternative to prescription drugs. [My opinion certainly, but echoed by most proponents of this pain-relieving substance.]

My first CBD experiment began two years ago with a product sold by HempWorx, a company recommended by a friend in Atlanta.  This occurred about one year before CL began covering and rating CBD products, so I bought the highest milligram concentration of CBD oil I could afford… around $90 for a month’s supply.  I diligently placed the suggested 15 drops under my tongue each night, and for the first one-two weeks felt no improvement.  Fortunately, I had been forewarned that “it takes time and to be patient.”  After three weeks, I realized that I could once again sign credit card receipts with alacrity (oh, my aching bank account); but even more impressive and totally unexpected, the excruciating pain in my jaw had become so minimal there were actually days I almost forgot it was there!

Better still, almost a year ago, CL began covering some of the major CBD brands, and I switched to their top pick which was and remains a company called Bluebird Botanicals.  The Bluebird Botanicals Hemp Extract Classic 1500+mg tested and rated highest for two reasons: (1) unlike several other companies also appearing on their rating chart, it actually contained almost the full complement of CBD extract per serving that was stated on its label, in this case 25mg (testing out at 22.3 mg); and (2) it had the lowest cost per milligram of the rated products.  Because here’s the caveat:  a certain brand might advertise “CBD” on its label and 1500 mg right below that, but those milligrams reference the total milligrams of hemp oil or hemp seed oil and other fatty acid additives garnered from the plant that make up the total product and which might contain little to no CBD; so step one when evaluating whether or not to purchase a particular CBD brand is to locate the actual milligrams of cannabinoids (CBD extract) PER SERVING contained in each bottle, and that is sometimes hidden in small print on the back label.  If it’s not listed anywhere…BEWARE.  By the way, another of CL’s highly-rated reviews went to Charlotte’s Web, a site also particularly well known for CBD products that help our furry friends, Rover and Boots.

Again, please don’t think this is an endorsement of one particular CBD product over another.  I was asked to write about what had helped me.  Other brands listed on CL’s website and also sold locally or online may be every bit as effective, but since I’ve spent considerable money subscribing to the expertise of CL, I’ve decided the safest course is to use one of their top recommended brands.  I want verified assurance that the CBD mgs per serving found inside the bottle match what’s advertised outside the bottle.

And that, in a nutshell, is my own limited experience with CBD.  Even at my daily verified low 25mg dosage (and, remember, clinical trials for far more serious diseases range in the hundreds of milligrams), it has helped me immeasurably, and, to date, I’ve had no unfortunate side effects, drowsiness or highs.  Is it addictive?  No.  Is it expensive?  You betcha… but hopefully as hemp becomes more widely grown and available, there will be a ramp up in CBD production and competitiveness, and its price, like all commodities, will fall.  I also encourage subscriptions to websites like ConsumerLabs so that you can read their in-depth reports, cautions and ratings going forward.  In the meantime, you can store this information in your arsenal of health related topics, safe in the knowledge that I, unlike the great Pat Conroy, have never attempted to write a work of fiction.  CBD extract works for me.  I know this because my pain level has eased down from a 10 to a 3, allowing me to resume activities I love.  But full disclosure, a serving under the tongue (most effective way to absorb) tastes incredibly– you gotta be kidding—AWFUL!  Just close your mouth, count to 60 and swallow.