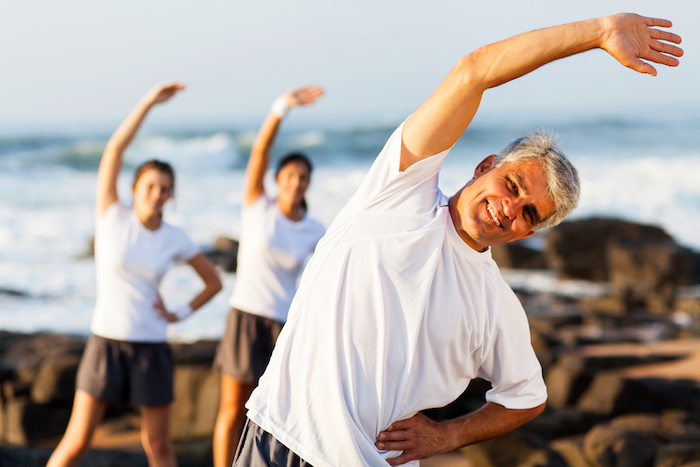 One of the many effects of aging is loss of muscle mass, which contributes to disability in older people. To counter this loss, scientists at the Salk Institute are studying ways to accelerate the regeneration of muscle tissue, using a combination of molecular compounds that are commonly used in stem-cell research.

In a study published on May 25, 2021, in Nature Communications, the investigators showed that using these compounds increased the regeneration of muscle cells in mice by activating the precursors of muscle cells, called myogenic progenitors. Although more work is needed before this approach can be applied in humans, the research provides insight into the underlying mechanisms related to muscle regeneration and growth and could one day help athletes as well as aging adults regenerate tissue more effectively.

Loss of these progenitors has been connected to age-related muscle degeneration,” says Salk Professor Juan Carlos Izpisua Belmonte, the paper’s senior author. “Our study uncovers specific factors that are able to accelerate muscle regeneration, as well as revealing the mechanism by which this occurred.”

The compounds used in the study are often called Yamanaka factors after the Japanese scientist who discovered them. Yamanaka factors are a combination of proteins (called transcription factors) that control how DNA is copied for translation into other proteins. In lab research, they are used to convert specialized cells, like skin cells, into more stem-cell-like cells that are pluripotent, which means they have the ability to become many different types of cells.

“Our laboratory previously showed that these factors can rejuvenate cells and promote tissue regeneration in live animals,” says first author Chao Wang, a postdoctoral fellow in the Izpisua Belmonte lab. “But how this happens was not previously known.”

Muscle regeneration is mediated by muscle stem cells, also called satellite cells. Satellite cells are located in a niche between a layer of connective tissue (basal lamina) and muscle fibers (myofibers). In this study, the team used two different mouse models to pinpoint the muscle stem-cell-specific or niche-specific changes following addition of Yamanaka factors. They focused on younger mice to study the effects of the factors independent of age.

According to Izpisua Belmonte, who holds the Roger Guillemin Chair, the observations from this study could eventually lead to new treatments by targeting Wnt4.

“Our laboratory has recently developed novel gene-editing technologies that could be used to accelerate muscle recovery after injury and improve muscle function,” he says. “We could potentially use this technology to either directly reduce Wnt4 levels in skeletal muscle or to block the communication between Wnt4 and muscle stem cells.”

The investigators are also studying other ways to rejuvenate cells, including using mRNA and genetic engineering. These techniques could eventually lead to new approaches to boost tissue and organ regeneration.

About the Salk Institute for Biological Studies:

Every cure has a starting point. The Salk Institute embodies Jonas Salk’s mission to dare to make dreams into reality. Its internationally renowned and award-winning scientists explore the very foundations of life, seeking new understandings in neuroscience, genetics, immunology, plant biology and more. The Institute is an independent nonprofit organization and architectural landmark: small by choice, intimate by nature and fearless in the face of any challenge. Be it cancer or Alzheimer’s, aging or diabetes, Salk is where cures begin.