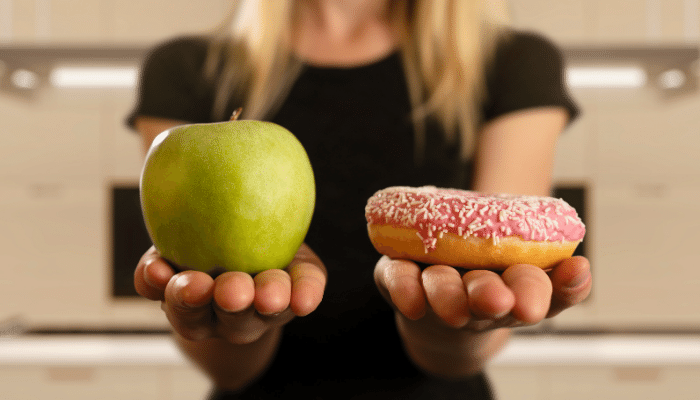 Many people are of the opinion that when dieting for weight loss, it is all about counting calories. If you want to lose weight, you just eat fewer calories or do extra exercise to burn more calories. That’s it, just one of those two options. But that is not true!

The concept is derived from the assumption that the body can be imagined as a simple energy burning machine, where any “extra” energy you eat must be stored as fat. You “burn” some average amount of calories every day both from exercise and basic metabolism. People then assume that any “extra” calories you eat on a given day, beyond what you burn, must be stored as fat. Likewise, if you don’t eat as many calories as you burn, it is assumed that those missing calories from your diet will be made up for by your body burning its own fat.

Then it is assumed that you can just determine how many calories you burn in a day, and then extra calories eaten above that number must lead to fat gain and eating fewer calories than that number leads to body fat loss. That’s it, no other details to worry about. This would work the same way regardless of what one is eating.

Our Bodies Are Complex

This concept holds some appeal because it borrows the language of energy balancing from physics and appears to be rooted in “common sense”. However, this fails to consider how the body actually processes energy, which is complex and involves a wide variety of chemical pathways. The body doesn’t just burn the food in a pure oxygen environment, as food companies do to assess the food’s total energy content. In fact, the calories in some foods many not even be fully absorbed by the digestive system.  And this also doesn’t consider how food consumption can impact hormones, which can also affect whether body fat is stored or broken down.

There are a lot of factors at play beyond just counting calories. This is particularly clear when you consider the research that has been done on short term fasting, where one might skip breakfast or eat all of their meals within a fixed time window such as 8 hours.  Consider a recent randomized controlled trial which demonstrated quite conclusively that when it comes to obesity and health generally there are dietary factors other than simple caloric intake.

This study in question compared groups of mice that were fed a very unhealthy diet.   One group of mice were allowed to eat this food at any time.  The other group of mice were only allowed to eat during an 8 hour window.  The total amount of food provided was the same, and both groups of mice ended up eating the same number of calories every day.

So, if counting calories was the only important factor in a diet, you’d expect the two groups of mice to end up about the same, health wise, right?  That’s not what happened.  At the end of the experiment, the mice that were allowed to eat whenever they wanted were hugely overweight, had unhealthy livers, and the equivalent of type 2 diabetes in humans.  That’s what normally happens to mice with this particularly unhealthy diet.  But the interesting part is that the group of mice who could only eat during an 8 hour window were perfectly healthy.  They were normal weight and had no applicable health problems.  The mice looked hugely different.

These results show us quite clearly that diet isn’t just about counting calories.  Even though they ate the same number of calories, one group of mice was quite obese and the other group maintained a healthy weight.  Now, this is an animal study, so the results cannot be directly applied to humans, it merely points the way for further research.  But on the positive side of an animal study, animals don’t lie about how much they ate, how much alcohol they drank, or how many cigarettes they smoked on their surveys. So you really do know with a much higher degree of certainty what those mice ate and how much of it, so the results are all the more convincing.

This is very good news.  Caloric restriction is not a very good tool for weight loss, so we should be glad that it is not the only one available.  That’s why so few people have success losing (and keeping off) weight with very popular caloric restricted diets. If this is surprising, consider the Women’s Health Initiative, the most ambitious, important weight loss study ever undertaken. This enormous randomized trial involving almost 50,000 women evaluated a low-fat, low-calorie approach to weight loss. Through intensive counseling, women were persuaded to reduce daily caloric intake by 342 calories and increase exercise by 10%. Researcher projected a weight loss of 32 pounds over a SINGLE year based on their understanding of thermodynamics.

When the final results were tallied in 2006, the experiment proved the opposite of conventional thinking. Despite good compliance, over seven years of calorie counting led to virtually no weight loss (.04kg). Not even a single pound. Therefore, something—that we now know is the endocrine system—must have superseded the overly simplified thermodynamic arithmetic associated with the concept of caloric restriction.

If your main goals are to lose weight, don’t simply jump to calorie restriction. If you want long-lasting results, you need to better understand our wonderful and complex bodies. They can do a lot more than we think!

John Jaquish, Ph.D is the inventor of the most effective bone density building medical device, which has reversed osteoporosis for hundreds of thousands and created more powerful/fracture-resistant users, John is now partnered with Tony Robbins and OsteoStrong for rapid clinic deployment. In the process of his medical research, he also quantified the variance between power capacities from weak to strong ranges in weight lifting, which brought him to his second invention, X3. The research demonstrates that this product builds muscle much faster than conventional weight lifting, all with the lowest risk of joint injury. The X3 program is used by elite professional athletes and associations such as the entire Miami Heat organization, various NFL and NBA players, as well as Olympians and professional bodybuilders.

Dr. Jaquish speaks worldwide about his Osteogenic Loading research and other biomedical advances. He is a research professor at Rushmore University, his alma mater, speaks at scientific conferences all over the world, has been featured in the LA Times, GQ Magazine, Forbes, multiple top health and fitness centric podcasts, and is an editor of multiple medical journals. His newest book, Weight Lighting is a Waste of Time: So is Cardio, and There’s a Better Way to Have the Body You Want is set to release in August 2020.