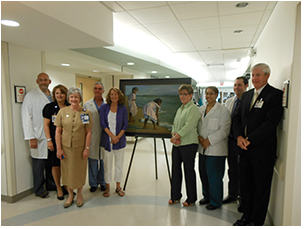 In August of 2002 my family was going through a “tsunami.” My twin sister, Joanne, was diagnosed with stage-three breast cancer, my brother was dying of melanoma, my mother was told she had to have her leg amputated to save her life, and I was diagnosed with a very large brain aneurysm. I was taken by ambulance to Emory University Hospital and Dr. Michael Cawley repaired the aneurysm. Miraculously, I was in and out of the hospital in two days!   My family’s ordeal, however, continued for another four years – I lost my brother and my mother to cancer, though thankfully, my twin survived.

Several years later I was inspired to paint The Day After based on a photograph from Indonesia taken the day after their catastrophic 2004 tsunami. The two girls on the beach are not in bathing suits, as would be expected, but are dressed as though they had been to church. Because the girls are dressed similarly, I think of them as sisters. The expression on the littlest one’s face shows her delight in being near the foamy water, now no longer terrible and threatening, with her arms wrapped around her in a measure of comfort.

My painting has been a constant reminder to me that things do get better and that, no matter how bad a situation becomes, it will pass. In December of 2009, my twin was rushed to Emory with a ruptured brain aneurysm. Miraculously, Dr. Cawley saved Joanne’s life, too. I will always be indebted to the wonderful doctors, nurses, and staff of Emory University Hospital for their contribution in making “The Day After” a reality for me, my sister, and so many other patients.

Life is a fragile gift.   On April 23, 2018, Joanne lost her seventeen-year war with cancer.    I was blessed to be with her when she took her first breath and by her side when she drew her last.

How to Prevent Osteoporosis

Five Surprising Things You Shouldn’t Do In Pregnancy